Our San Francisco bike tours are true local adventures led by awesome local SF guides so you get an insider’s experience of the Golden Gate Bridge, coolest city neighborhoods, most beautiful nature, best food, and so much more. Each adventure showcases the city’s coolest neighborhoods, essential landmarks like the Golden Gate Bridge, a taste of our incredible food culture, awesome hidden gems, and the absolute best experiences you’ll find from any San Francisco guided bike tour.
Previous
Next
OUR MOST POPULAR TOUR!

Our electric bikes so they’re extra fun, comfy, & easy-to-ride. We have a bike to perfectly fit you.

We’ve done many bike tours both domestically and internationally, and Nick was far and away the best bike tour guide we’ve ever had!!! His passion for San Francisco as well as his knowledge of history and interesting tidbits of information kept us thoroughly entertained throughout the trip. His service is top notch from the expert bike fitting and his careful attention to detail making sure we were all comfortable safe and enjoying ourselves. We had a spectacular dry sunny day so every stop was a wonderful photo opportunity. He was generous with his time his recommendations and willingness to help now and in the future. Highly recommend!!!

Nick from Dandyhorse just took us on our best experience in San Francisco! My husband and I got a real taste of the varied and dynamic cultures and history of all the very best, unique SF neighbourhoods, local haunts and incredible eateries. Whether you are an art enthusiast, foodie, architecture lover or just a culture vulture you will leave with a deep sense of satisfaction, knowledge and at least one new friend! Thank you Nick for a wonderful day, you are the real SF legend.

Dandyhorse offered such an authentic and epic experience on so many levels… our guide, Nick, possessed so much detail about architecture, history, neighborhoods etc even locals (not on the tour) were commenting on how they learned stuff. In roughly 5 hours we covered all best neighborhoods and got the ins and outs, you could never get without an experienced guide.We couldn’t have asked for a better experience and such a grand overview in such a condensed amount of time. We fell in love with the city because of Nick. His tour was world class!!

Nick is an amazing bike tour guide. First, you will be on one of his custom-made bikes that feels like something you would have bought for yourself. No cheap mass produced bikes here. Nick has gone to extraordinary lengths to keep the tour route accessible and on designated bike infrastructure (think safety). It probably took months for him to pick such an amazing route. And then there is the route itself – through SOMA, the Mission, Castro, Lower Haight, Haight-Ashbury, and the east side of the Golden Gate Park. We had lunch in Alamo Square Park, rode by the Conservatory of Flowers, and went up the de Young Museum Tower for a panoramic view. I can’t say enough good things about this tour. It was truly a highlight of my time in SF. Thank you Nick.

Our bike tour with Nick was by far and away the most fun, informative and unique experience we’ve had in San Francisco. His engaging style and fantastic historical and current day context made this ride one we will not soon forget. Thank you Nick for your passion and energy… we will be back 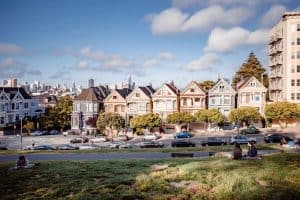 The 12 Best Bike Trails in San Francisco San Francisco is one of the most legendary urban biking destinations in the world, a true cyclist

We truly believe that in order to fully understand and appreciate a place, you have to know its history. And landmarks are a beacon in

San Francisco’s Best Electric Bike Tours are here – and they make you feel like a Superhero!

A curated insider’s guide to our favorite places to eat, drink, and explore in the city

Why Book With Us?

Get a 100% authentic, unique SF experience