Home » SF Guides » What is San Francisco Known For?

What is San Francisco Known For?

San Francisco is an iconic city unlike any other in the world. It’s rare to find a city that’s as famous for its transportation and its landscape as it is for its architecture and cuisine.

If you’re visiting or planning to visit San Francisco for the first time, lucky you. There’s so much to see and explore.

To make sure you don’t miss out on anything, we’ve compiled a list of what San Francisco is known for (and yes, the bridge made the list!)

1. The Hills and Views

How many cities can boast that the best viewing spot is 100% free?

San Francisco is home to 48 (48!) named hills, and plenty of opportunities to take in the cityscape.

The breathtaking view from Twin Peaks is arguably the best in town. There are no trees or buildings to obstruct your 360-degree panorama which includes from the Golden Gate Bridge, the sailboats in the bay, and downtown San Francisco.

If you want to avoid tourists, Tank Hill offers similarly impressive views, and if you’re lucky you might even get the park to yourself.

The system built to navigate the notorious inclines is as iconic as the hills themselves. San Francisco is the only place in the world that still has a manually operated cable car system. The charming “ting-ting” of the bell is part of every-day life for the locals who still use the cable cars for their daily commutes, though nowadays it’s most popular with tourists

Obviously it made the list. The stunning Art Deco styling of the Golden Gate Bridge makes it one of the world’s most recognizable structures in the world.

Declared one of the wonders of the modern world in 1994, the Golden Gate Bridge declares 10 million visitors a year. It’s not just pedestrians and cars, but cyclists are also able to make the crossing from San Francisco Bay to the Pacific Ocean. The footpath and bike path are separated from traffic by fencing, so it’s a safe experience for all.

For a unique experience, check out our self-guided Golden Gate Bridge Bike Tour Extension. You’ll be able to go at your own pace and take in the bridge in all its glory.

As you cross, look out eastwards to see another iconic part of San Francisco: Alcatraz island.

For an unobstructed view, you might want to check the weather before heading out to avoid the fog. Speaking of which…

Summer in San Francisco, in particular, is defined by this extraordinary meteorological phenomenon.

Locals have a love/hate relationship with the fog which is so familiar to us, we even gave him a name: Karl. You can even follow @Karlthefog on Twitter.  Yes, he makes us wear layers even on days otherwise forecast to be bright and sunny, but San Francisco wouldn’t be San Francisco without the fog.

Don’t worry, our summers are generally bright and sunny for most of the day, but be prepared for chilly mornings and evenings when Karl comes to visit.

If you’re prepared to wake up early and head up one of San Francisco’s previously mentioned hills, you’ll see the city in a whole new light. The pillows and streams of fog that nestle close to the landscape bring a kind of ethereal peace to the city.

As the fog lifts it casts a romantic, somewhat eerie haze that is beloved by local and visiting photographers.

No matter how much you love the excitement and vibrancy of downtown San Francisco, as with any city, you occasionally need to head to nature to recharge. Luckily for us, there are plenty of options.

The Golden Gate National Recreation Area covers 82,027 acres of protected ecologically and historically significant landscapes surrounding San Francisco. Below is just a selection of the beaches and parks in and easily accessible to the city.

For spectacular views of The Golden Gate Bridge, head to Baker Bridge (birthplace of the Burning Man Festival) or China beach. A heads up – North Baker Beach is clothing optional if that’s your jam.

If you want great views without the crowds, you’ll want to head to Kirby Cove Beach. To get there you’ll need to trek about a mile from the nearest parking lot on Conzelman Road, which helps explain why there are fewer people.

If you’re after something a little wilder, head across the Marin Headlands to Rodeo Beach. It’s notable not only for the majestic rocks that sit just offshore but also for the fact that it’s composed of tiny, curiously-colored pebbles (red, blue, green, yellow, and brown).

San Francisco has no less than 220 parks for you and your family to relax and play in.

The most famous is without a doubt Golden Gate Park. Over 1000 acres, it contains meadows, lakes, cafes and restaurants and plenty of activities for you to enjoy. It’s also where the party’s at hosting multiple music, arts, cultural and family events each year.

If you’re visiting with your best four-legged friend, there are 31 designated park areas across the city for your dog to let loose and socialize.

If you’re after even more nature, read our blog: “Must-Visit National Parks near San Francisco”.

San Franciscans are foodies. Flavor and importantly freshness matter to us. So it’s perhaps not surprising that seafood is a staple on many regional menus.

If you have a humble and hearty palate, ‘Joe’s Special’ is a classic San Francisco diner dish made up of scrambled eggs, ground beef, spinach, and onions.

Aside from traditional dishes, the San Francisco culinary scene is also incredibly diverse and innovative. Check out Lazy Bear and In Situ examples of restaurants, reimagined.

One of the great challenges of any tour of San Francisco is visiting as many districts as possible whilst also allowing enough time to absorb the character and charm of each place.

Cycling the city provides the ideal balance. Our 5-hour essential tour covers the hip, the historical, the curious, and the culturally significant parts of town spread across over 10 neighborhoods. From our home base in SoMa to Golden Gate Park and back, we take in the diversity of SF’s hippest neighborhood, Mission District, the history of Alamo square, the vibrancy of the Castro and so much more.

One of the greatest affirmations of San Francisco’s eclecticism and openness to change is its architecture. There is little to no uniformity.

Taking a stroll through Golden Gate Park, you’ll see the Conservatory of Flowers, an unmistakably Victorian glass and wood structure, mere minutes away from the modernist, copper-clad De Young Museum.

Over in the Castro district, Castro Theatre evokes a Spanish colonial Mexican cathedral in its design. While in Lower Pacific Heights, an actual cathedral (St Mary’s) is so modern and minimalist that locals refer to it as “Our Lady of Maytag,” believing it to resemble a dishwasher agitator.

Of course, no list of San Francisco’s iconic architecture could neglect to mention the Painted Ladies. Beginning in the 60s, the owners of a row of Victorian and Edwardian buildings in Alamo Square took to repainting their facades in bright colors and emphasizing their architectural features.

Read our blog “12 Amazing Historical Landmarks in San Francisco” for more examples of iconic architecture in the city.

Get the latest posts delivered right to your inbox 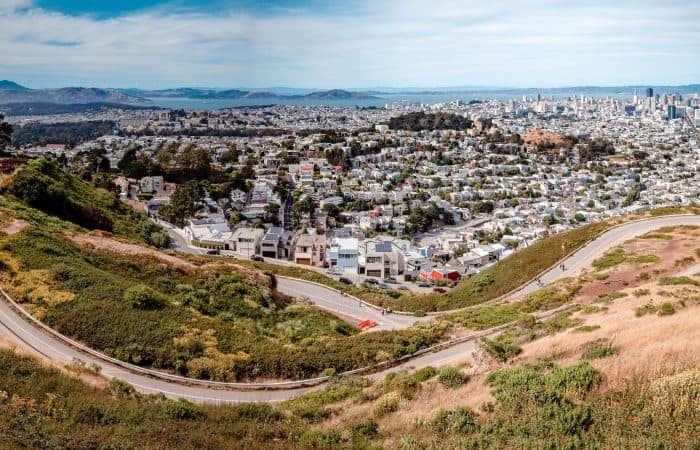 What is San Francisco Known For?